HomeCinema RESISTAngela – Portrait of A Revolutionary

Angela – Portrait of A Revolutionary 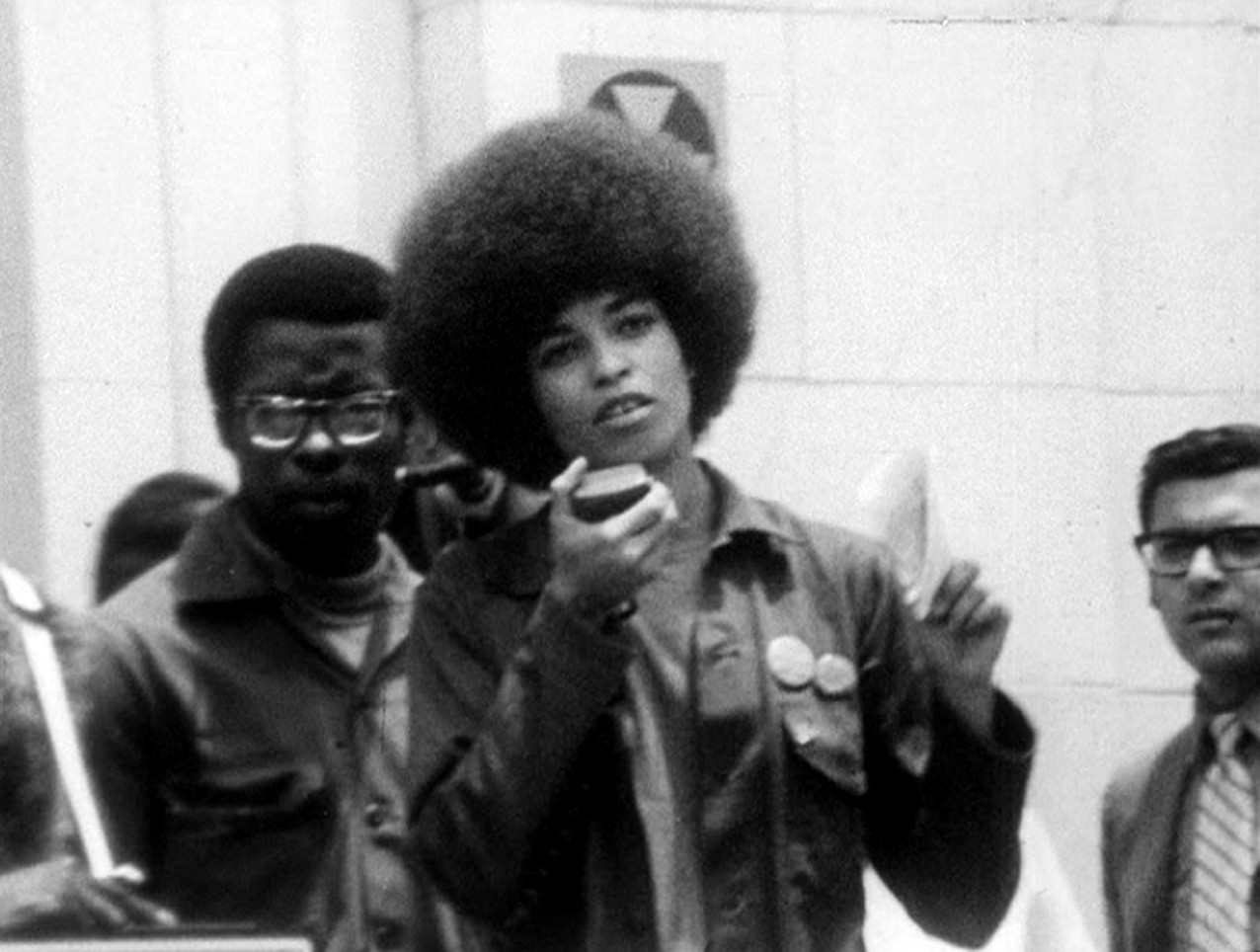 To kick off the Cinema RESIST! film series, the Rautenstrauch Joest Museum is showing the documentary Angela - Portrait of A Revolutionary, a film by French documentary filmmaker Yolande du Luart (USA/France 1971), in light of recent events and ongoing racism in the U.S. and on the occasion of Black History Month, which black communities in Canada and the U.S., but also in this country, celebrate every February.

This film is a unique portrait of the young philosophy professor and activist Angela Davis, who was teaching philosophy at the University of California at Los Angeles (UCLA) when filming began in 1969 and was arrested a short time later as a committed communist and member of the Black Panther Party.

The opening scene already takes us right into the action, showing the arrest of Angela Davis. After receiving an assistant professorship at the University of Los Angeles in the summer of 1969, then Governor of California Ronald Reagan arranged for her dismissal when her Communist Party affiliation becomes known. However, Angela Davis had to be reinstated as a result of a court order.

During this time she becomes a member of the Black Panther Party and befriends George Jackson, who is arrested in 1960 at the age of 18 for allegedly stealing $71 from a gas station in Los Angeles.

George Jackson, who becomes politicized in Soledad Prison, becomes a member of the Black Panther Party, and Angela Davis motivates him to write a book about his prison conditions. "Soledad Brother," a collection of letters written by George Jackson between 1964 and 1970, is created.

Then in 1970, George Jackson and two other inmates - Fleeta Drumgo and John Cluchette - are falsely accused of murdering a white prison guard.

Angela Davis organizes a defense committee, the three prisoners become known as the Soledad Brothers, and Angela Davis's contract at the university is not renewed.

When George Jackson's younger brother, Jonathan Jackson, attempts to secure the release of the Soledad Brothers by taking hostages during a court hearing, four people are killed, and Angela Davis is prosecuted as an accessory and arrested on October 13, 1970. Yolande Du Luart's documentary starts here.

Overall, it can be said that the film represents an activist and collective film practice typical of the 1970s. In the U.S., it was the time of the Newsreel collectives, a cooperative movement initiated by the Lithuanian-American avant-garde filmmaker Jonas Mekas, whose mission was to make political films and to question all aspects of cinematographic practice: production, direction, distribution. In France, too, at the end of the 1960s, directors, cameramen and technicians joined forces in many places to support resistance movements, guerrilla actions or workers' struggles.

The documentary Angela - Portrait of a Revolutionary can be located in this context and overlaps the various liberation struggles against colonialism and imperialism. For example, there is a scene in the film in which Angela Davis quotes from the 1966 feature film "La battaglia di Algeri" (The Battle for Algiers) by Gillo Pontecorvo. This historical drama tells of the Algerian liberation movement and its struggle to overthrow the French colonial government in the mid-1950s (Algeria gained independence in 1962) - a reference central to activist Angela Davis.

Here, the anti-colonial struggle manifests as a transatlantic moment of solidarity.

Saxophonist Harold Battiste's song "Free my Brother," composed for the film, accompanies the protests of the revolutionary subjects. Free my brother, free my Sister: a demand that unfortunately remains urgent.

Angela Davis is born on January 26, 1944, in the U.S., in Birmingham, Alabama, the fourth child of Sally Davis, a teacher, and Frank Davis, a gas station owner. Birmingham was known as "Bombingham" within the black communities and was by far the most racist city in the southern United States. Between 1957 and 1963, members of the racist and Protestant Ku Klux Klan perpetrated at least 50 acts of terrorism, there were at least 18 racist bombings, and lynchings were commonplace.

In this climate, black uprisings became more frequent, and after civil rights activist Malcolm X was assassinated in Harlem in 1965, Huey P. Newton and Bobby Seale founded the Black Panther Party for Self-Defense - an African American organization that opposed police violence and racist terror and, as a Marxist-Leninist group, denounced the link between capitalism and racism.

Angela Davis, who had spent her childhood with a host family in New York so that she could attend the progressive high school Little Red School House here - in Alabama, blacks had no opportunity to attend high school - had finished school with honors in the early 1960s and received a scholarship to Brandeis University in Waltham, Massachussettes, where the political scientist and sociologist Herbert Marcuse taught. Here Angela Davis studied French literature beginning in 1961 and went to Paris as a visiting student at the Sorbonne from 1962 to 1963. In France, she experienced the protests against the Algerian War and recognized parallels to the liberation struggles of blacks in the United States. She later studied philosophy and sociology with Adorno and Habermas in Frankfurt (Germany) and returned to the U.S. in 1967, where she completed her doctorate with a thesis on Immanuel Kant under Herbert Marcuse.

In the meantime, as more and more black activists in the U.S. joined the Black Panther Party and many white allies also supported the struggle, the government's repression increased.

A multitude of arrests and murders by police and FBI followed, Black Panther Party co-founder Huey Newton was shot by police in Oakland, and on December 6, 1969, Chicago chapter president Fred Hampton was assassinated. In the face of this racist violence, the African American freedom struggle radicalized and "Black Power" - power in the sense of might and violence - became the new slogan.

Angela Davis, who was now a professor at UCLA, campaigned to free the prisoners.

UCLA is also where Yolande du Luart, the filmmaker of Angela - Portrait of a Revolutionary, studied. A French documentary filmmaker who studied philosophy at the Sorbonne in Paris, she was an activist in the Situationist International in the late 1960s. As a film student at the University of California, Los Angeles (UCLA), she and fellow students made the documentary Angela - Portrait of A Revolutionary.

The filming lasted from the fall of 1969 to July 1970, and although Yolande du Luart was forbidden from filming on the university campus, she managed to film on campus with the help of independent filmmakers or Black filmmakers, the group L.A. Rebellion.

When the FBI became aware of the group's filmmaking, du Luart immediately flew back to Paris with the uncut raw footage to finish the film there. Here she received support from French television and the writer Jean Genet, who was politically active from 1970 and worked in Paris with activists of the Black Panthers.

Filmmaker Yolande du Luart stayed in France, worked as a translator and writer in the following years, and made a documentary on Howard Hughes and two films on China for French television.

Angela Y. Davis: If they Come in the Morning. Voices of Resistance, Verso Books London/Ney York 2016 [First published by The Third Press 1971]