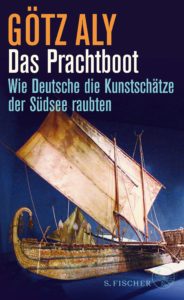 Register via the following link: https://us02web.zoom.us/meeting/register/tZ0sce-tpzoiG9xxeNted_x8AqCFgcoNO8gm

Political scientist Götz Aly in conversation with journalist Stefan Koldehoff about his new book “Das Prachtboot. How Germans Stole the Art Treasures of the South Seas.”

Alongside monuments and street names, enchanting museum objects bear witness to the former colonies – but how did they come to us and where do they come from? Götz Aly reveals that in the vast majority of cases they are colonial looted art, and tells how brutally German traders, adventurers and ethnologists went on the prowl in the South Seas. This was also the case on the island of Luf: There they destroyed huts and boats and almost completely exterminated the inhabitants. In 1902, Hamburg merchants seized the last ocean-going outrigger boat, which had been artistically created by the survivors. Today, this unique piece of art is destined for the entrance to Berlin’s Humboldt Forum.

Götz Aly is a historian and has won many awards for books on anti-Semitism and Nazi crimes, including the Heinrich Mann and Ludwig Börne Prizes. In 2018 he received the Geschwister Scoll Prize for the book “Europe against the Jews 1880-1945”.