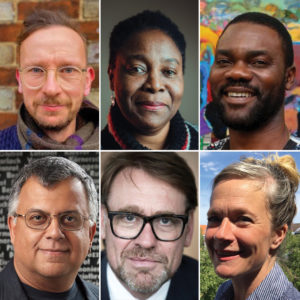 As part of the exhibition RESIST! The Art of Resistance, the Rautenstrauch-Joest Museum (RJM) is organising a series of events on restitution and justice.

For several years, the RJM has been seeking new forms of cooperation with the countries from which the objects in its collections originate and would like to collectively develop a new ethic of international cooperation in which restitution is understood as a gesture of fairness and solidarity.

The debates surrounding the restitution of cultural objects originating from a colonial context have intensified and changed in recent years. What seemed hardly conceivable eight years ago has now become museum practice. Thus, on 29 April 2021, under the leadership of Minister of State Grütters and the Federal Foreign Office, the most important German museums with Benin bronzes in their collections and their representatives agreed on the first restitutions in 2022.

What does that mean in concrete terms, and what further steps will now be taken?

Restitution is often seen as an individual and final act, an end that can even threaten the existence of a museum’s collections and research work.

But what happens when restitution itself is seen as museum work?

BENIN 1897 – COLOGNE 2021 is the first international debate following the roundtable discussion of 29 April 2021 and aims to shed light on the historical context of the looting, convey the emotional connection with the works in contemporary Nigeria, as well as outline the latest political developments at the federal and local levels in Cologne, and finally explain the plans for the new Edo Museum of West Africa Art (EMOWAA) to be built in Benin City, Nigeria.

Dr. Andreas Görgen is Head of the Department of Culture and Communication at the Federal Foreign Office; he was in Nigeria for initial talks in March and will hold further discussions in Nigeria with a museum delegation.

Professor Dr. Dan Hicks heads the Contemporary Archaeology Department at Oxford University and is also Curator of World Archaeology at the university’s Pitt Rivers Museum. His book The Brutish Museums: The Benin Bronzes, Colonial Violence, and Cultural Restitution was published in November 2020.

Dr. Peju Layiwola is an artist and Professor of Art History (Head of Department of Creative Arts) at the University of Lagos, Nigeria. She is one of the “It’s yours!” curators of the exhibition RESIST! The Art of Resistance” at the RJM.

Enotie Ogbebor is an artist and member of the board of the Legacy Restoration Trust (LRT) in Lagos, a member of the steering committee of the Benin Dialogue Group, and works with Sir David Adjaye on the design of the Edo Museum for West African Arts (EMOWAA) in Benin City, Nigeria.

Nanette Snoep has been the director of the Rautenstrauch-Joest Museum since January 2019. She has curated many international exhibitions about issues of colonialism, violence, and colonial trauma.

The event will open with a short video message by Henriette Reker, Mayor of the City of Cologne.

The online discussion event will take place Friday, 14 May 2021, 7 pm, in English. There will be a Q&A afterward.

Registration for the online event at: https://us02web.zoom.us/meeting/register/tZ0sd-uorzssH9Dn4FJ03EA3SpI_MVzI9Hy_

The discussion and Q&A will be streamed live on YouTube and will be accessible for viewing after the event. German subtitles will be available at a later date. https://www.youtube.com/c/RautenstrauchJoestMuseum/

The complete inventory of the Cologne Benin Collection is available on the RJM
website: http://rjm-resist.de/portfolio-item/benin-bronzen/